FREE or reduced delivery for orders over $179.
5% OFF + FREE Item for Life when you Subscribe & Save!

Why We Use Conrath Quality Meats (CQM) In Conrath, WI (Close To Ladysmith).

We spend an awful lot of effort to raise amazing meat so we needed to make sure that our high standards were going to be carried through all the way to the end. We've heard horror stories of farmers not doing their due diligence and making assumptions about the closest butcher being fine and then they ended up with MSG in their meat, or it was mixed with other peoples product or the packaging/labeling was poor. So before we set dates to take our animals in we called or stopped by about twenty different butchers, within reasonable driving distance of the farm, to see what their product looked like, read ingredient labels and find out if they were wiling to deal with weirdos like us.

We are the definite weirdos in the butchering world (meaning: no weird stuff, excellent visual final product, assurance its our meat we are getting back); which is quite a problem actually because butchering is the bottleneck in a lot of places. We had to schedule our fall 2018 beef about a month ago because that's how fast CQM fills up....others are even faster with their really high-demand times.

Because most butchers are overwhelmed just keeping up with conventional meat, very few had any interest in stopping/changing/slowing production to accommodate our little farm and our pretty big demands and expectations. Mind you, we had no prior farming or dealing-with-butchers experience so I was pretty bright-eyed and bushy-tailed with how I thought my super optimistic, we-have-amazing-meat!! and way-too-many-exclamation-points conversations were going to go with all these butchers. Seriously, some were downright mean. :(

So, those 20 were very quickly whittled down to about 4. We set up appointments at all of those that were willing to do things the no-weird-stuff way and waited.

Some of you have been with us from the very beginning and may remember some of this "experimentation". Suffice it to say that some of these butchers may have technically been able to do things naturally but realistically they were not. I don't know if they were overcompensating because of the lack of chemicals but there was bacon that you truly could not eat plain because it was soooooo salty....that was sold as "bacon for bean casserole only".

New question: can you do "no weird stuff" well?

Others did not have a vacuum-sealer and so everything was paper-wrapped. Paper-wrapping is not even an option in my world, it needs to last in the freezer and why use paper when you can seal it and it will be just as fantastic on day 1 as on day 31? No worries about freezer-burn, having it dry out, etc. But, turns out there are different kinds of vacuum-sealing. Some use plastic so thin that every package gets a hole and so it's no different than paper wrapping and then, because of the thinness, it puckers so much that you can't even see the meat inside of it.

Okay, so now we need someone that uses the right kind of plastic.

At this point, we've been taking animals in for awhile so now we are learning about consistency. Turns out that not all butchering facilities are the nicest places to work and some have really high turn over rates. Which is not a huge deal unless you keep hiring different people that are putting out almost an entirely different product. So then that was happening.

So now we need a butcher that is consistent in their products.

We also learned a lot about labels. Some butchers made the label all about them so then it was really hard for people to visually be able to look at the different meat in the freezer and see which ones were from Together Farms, some people actually thought we had different first names because it was hard to tell if the label was talking about us or the butcher. So then we started the year long process of designing our own label.

Now though, we needed a butcher that was willing to put on our own labels instead of theirs.

Then, We Learned About Conrath Quality Meats. Thank. The. Lord.

The beautiful thing about CQM is that they were formerly owned by a bison company and bison customers are going to be looking for very similar products as our customers. So, instead of being the weird exception, we were actually the norm at CQM! The other wonderful thing is that there are no nitrates at all....no celery juice/powder! What I've learned is that it's actually better to just get meat with straight-up nitrates added because it's very controlled and they know exactly how much they are adding; whereas, with celery powder, it's like the wild-wild west and some butchers just add a ton because they feel uncomfortable about the whole thing so you actually can end up with way MORE nitrates when they use celery. Just meat and spices please. Geez, should be easier.

Nice to talk to. Check.

Final product is visually appealing, in thicker plastic, with the TF label. Check.

I mean, it sounds a little funny that I have to be this concerned about how the final product looks, but, despite my protests, at the end of the day, I have to worry most about marketing and we all do buy with our eyes so I'm just as guilty as everyone else. But, in my case, I can feel good about having a beautiful final product....unlike other companies and the corporations that are "greenwashing" and tricking you into thinking you are buying something comparable to Together Farm's meat when you are really buying factory meat from a Chinese-owned (almost all the pork in the US) corporation. Like I've always said, the other local farmers trying to raise meat well is not my competition, the huge corporations with multi-million dollar marketing budgets that are tricking you, that's my competition. My freezer would be empty if they did not greenwash and outright lie and deceive you.

We know we are getting our meat back. Check.

So, I actually really dug into this one with CQM. This is a really big deal. Did you know that some butchers just mix together big batches of ground meat in order to be able to do a large batch of sausage at once? Think about it. Making sausage is messy and there's a lot of equipment (with a lot of little pieces that need to be taken apart and cleaned) involved. So, it's much faster to just mix a bunch together and do 200# at once instead of 25#. But, not CQM! They also have an elaborate tagging system to make sure every animal is identifiable from the owner down to the individual animal's tag number the whole way through. I am very confident that we are always getting our animals back.

They care about the animals. Check.

Have you watched Food Inc yet? That will explain why it matters that a butcher does animals one at a time. In fact, CQM is Animal Welfare Approved to prove that they are doing things right by the animal too. In a perfect world we would be able to allow the cattle to graze and then just go in the field by them and do the sad part out there.....they would not even know to be stressed because the entire time they'd be happy and eating until, well, they weren't. But, sadly, the state and USDA rules do not allow for livestock to be killed out in the field. So, they have to be driven in and yes, this causes stress because the pattern they were used to is changing (not because anyone is being mean). Stress can cause the meat quality to decrease so we take the animals up to the CQM the day before, CQM has a nice big field for them to graze, walk around, drink water, etc and then they will calm down overnight and make everything better and easier for everyone....it's really the best we can do given the regulations and fact that most butchers do not have big grassy fields but only concrete pens in the back where they might be crowded with a bunch of other, unknown animals and constantly stressed.

Now, let's bring it down a tiny bit, things haven't always been perfect. There was a blip in consistency when ownership changed from the bison people to CQM. But, we are actually in a better place because it's a family-owned business and three brothers actually own CQM now. In addition, they have two sisters and some other family that works for them. The three brothers each take charge of their own place in the process so we can expect a pretty consistent final product. Since there are 3 of them, they also do not have the huge staffing turnover that other butcher plants experience either. The brothers are Jeff, Chad and Ben (the one sister is Liz, who you may talk to on the phone sometimes). Another thing very much worth noting is that they are young and not set in their ways like a lot of the grumpier butchers I talked to in the first round of cuts (pun!).

When you support us, you are supporting another family business with CQM. Again, supporting local has huge ripple effects that can truly change your entire community.

We talked quite a bit about their philosophy at CQM last week and I was quite happy with what I heard. They want to work with the local producers (we are one of their furthest away accounts). They truly care about the animals. They put quality over quantity. At the end of the day, they want our customers to be happy and they are willing to work with us to achieve our (and your) goals. Like us, they are in this for the long-run. In fact, they are shut-down right now in order to remodel and update their facilities so they have no problems with their new licensing.

They are far away. It's a 2 hour drive one-way for us to get there. This means there is a real cost in time and fuel we need to account for. This also means that we try to be efficient when we do make the trip up there, so we like to always be bringing something back when we take animals in (be loaded with animals going there and be loaded with meat coming back). The problem with this for you, is that we will not usually make a trip up there once the fresh stuff (not smoked) is ready. We usually wait until the smoked products are done too and that can sometimes take a month from when we drop the animals off to when it's ready.

The problem here is that we can only sell at farmer's markets or to co-ops or other stores, in Wisconsin. Online sales are fine to happen anywhere but we are pretty limited in our ways to connect with you, especially because we are so close to MN which has basically been a barrier up until now. Hence the reason we have been so slow to grow and so reliant on word-of-mouth (thank you!!). But, this summer, CQM (and our meat) will become licensed for sale in other states too! So get ready Minnesota and the rest of the US we'll be there soon!!! If you have a store in MN (or wherever) or would love to see us somewhere....we can start those conversations now. :)

Cut of the Week! Ground Beef! 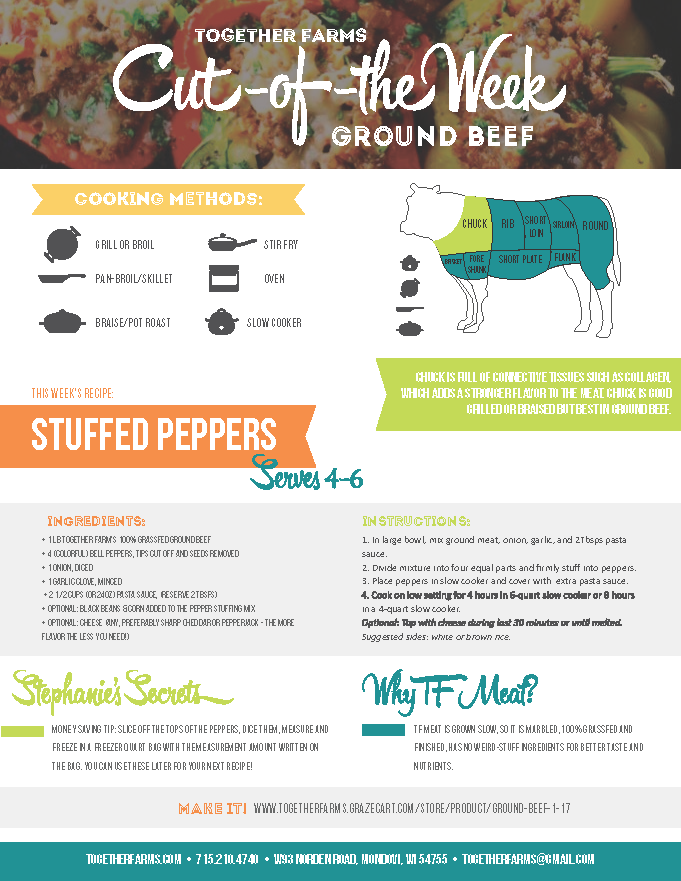 Cut of the Week! Ground Pork! 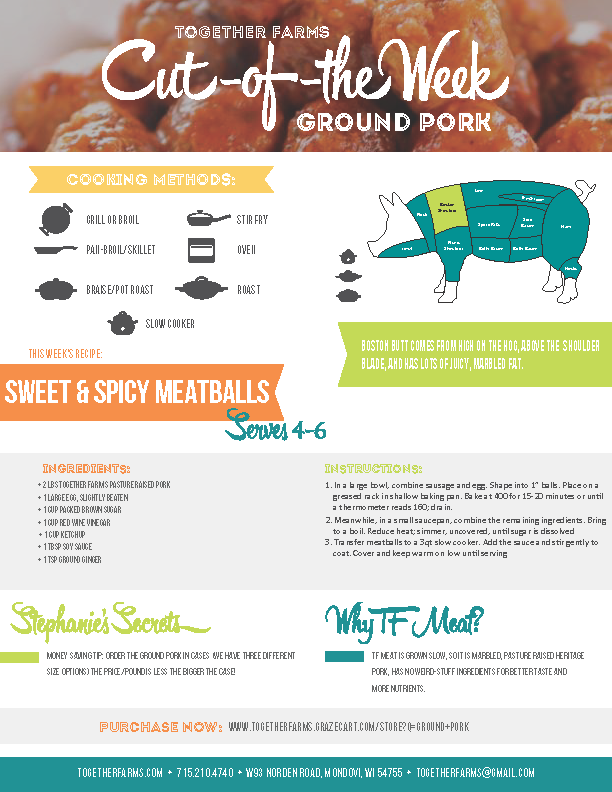 Cut of the Week! Chorizo! 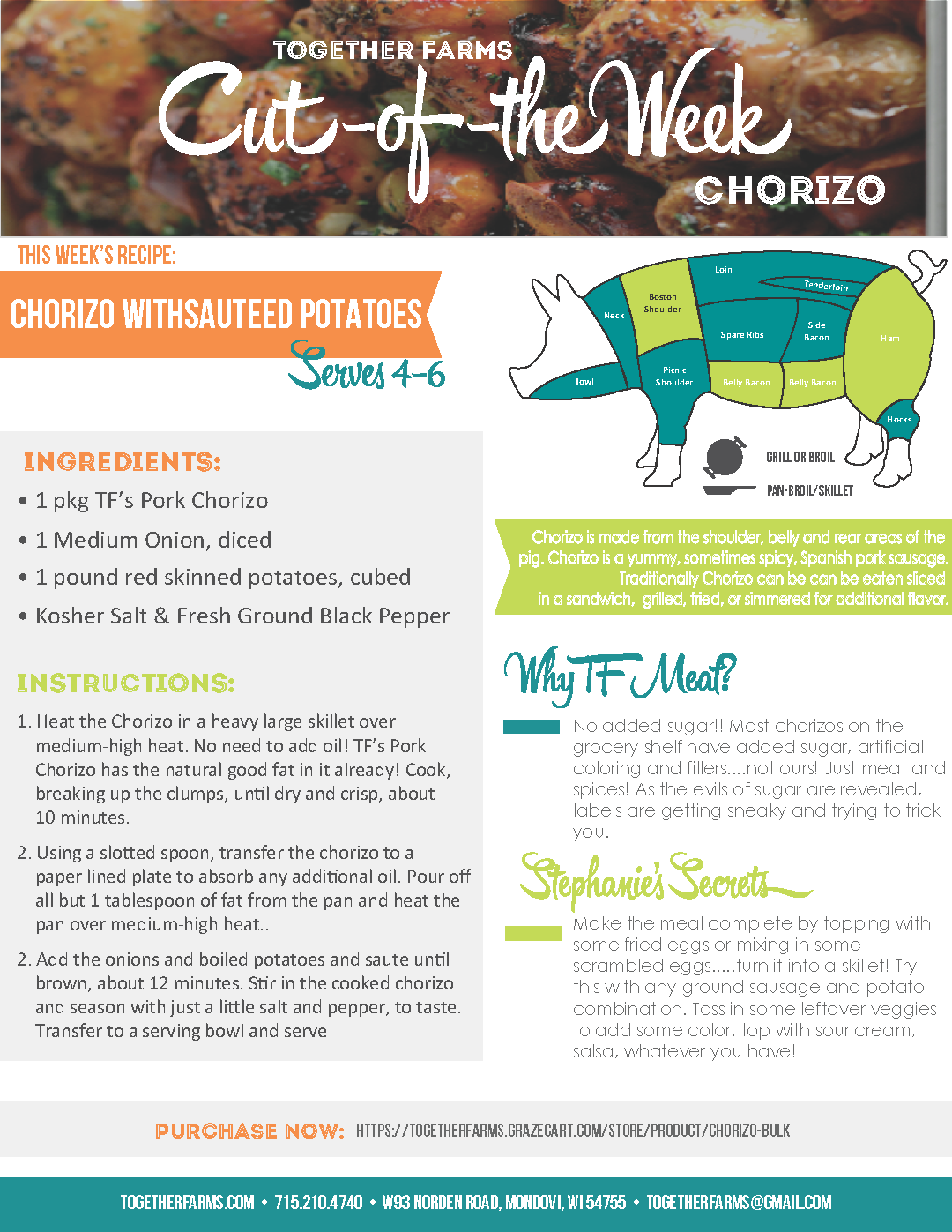