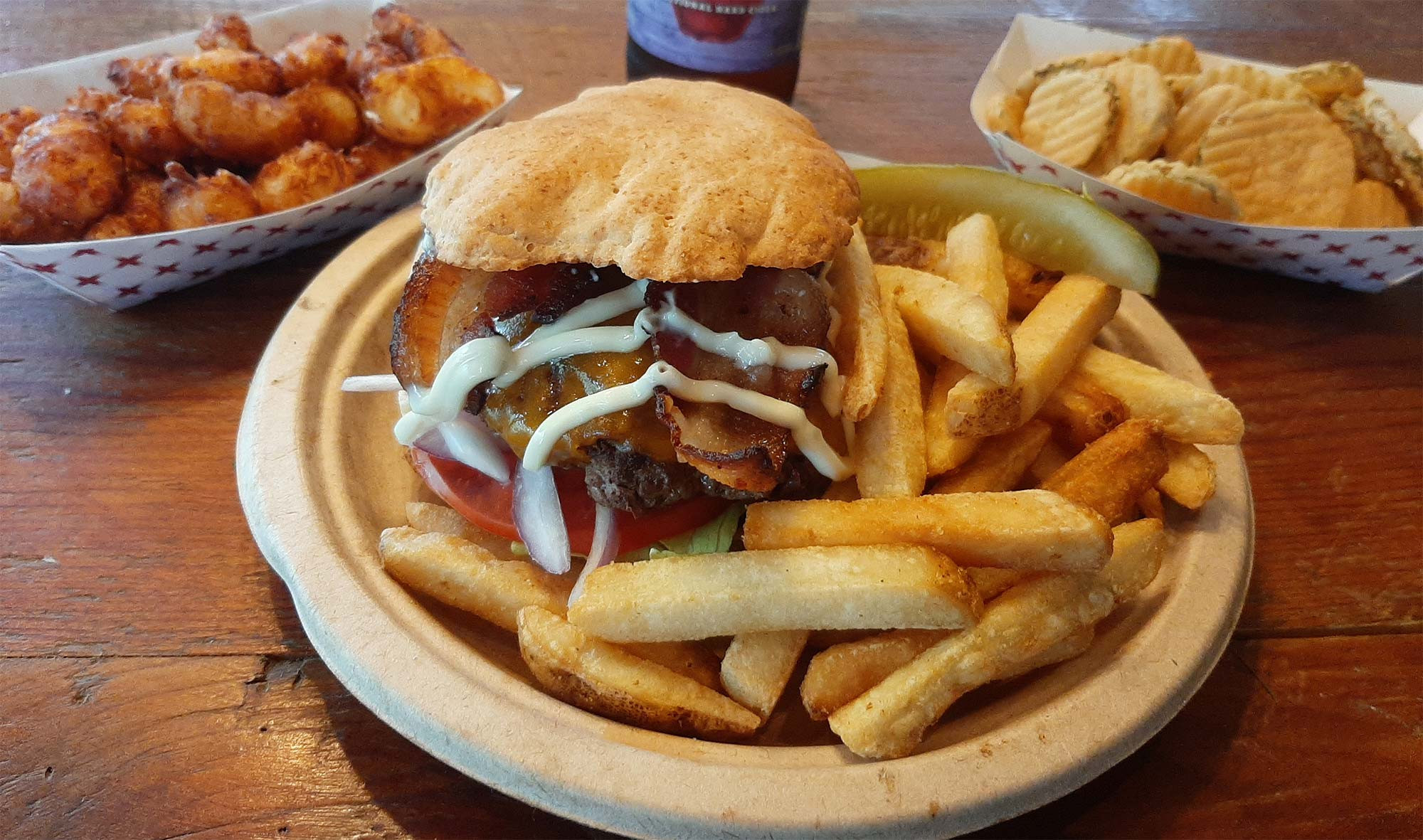 I have some GREAT news for anyone out there like myself who has Celiac Disease, is gluten intolerant or has a gluten sensitivity etc; you can eat virtually everything at Burger Night!!!! Gluten free burgers, buns, fries, cheese curds AND beer all available at Burger Night!

I'll repeat that for you: Gluten Free Options at Burger Night!

I'm going to come back to the cheese curds and other gluten free goodies at Burger Night, I promise! But first I want to give you a little background into this gluten-free world some of us unlucky humans (and some animals!) are forced to live in because the fact that Together Farms is offering these items is a very big deal. I was diagnosed with Celiac Disease in November, 2016 at the bright age of 21. Celiac Disease is a "serious autoimmune disorder that can occur in genetically predisposed people where the ingestion of gluten leads to damage in the small intestine." - Celiac.org.

How I finally got diagnosed...

I've had stomach problems my entire life and because every doctor I had told me I was the picture of health and that there was absolutely nothing wrong with me I chalked these problems up to a sensitive/nervous stomach. Eventually I thought I was crazy because any test the doctor would (reluctantly) run would come back with "perfectly healthy" results.. So I gave up for a long time and just decided my symptoms were "normal." This worked until my symptoms (severe nausea, lightheadedness and dizziness 24/7 along with spending 5+ hours in the bathroom each day) became too much right around my 21st birthday. So I sternly asked my new doctor [who told me I might have Irritable Bowel Syndrome but that my symptoms were at every point of that spectrum so probably not], to refer me to a Gastroenterologist. (Okay, fine my Dad made me ask because my symptoms were WAY out of hand, but also by sternly I mean very nicely and timidly)*Note that I'm VERY terrified of needles, blood and pretty much hospitals in general so even asking to see a new doctor who was definitely going to run blood work on me was a very big step*Once my gastroenterologist took a LOT of blood and ran some tests, EVERY test came back "perfectly healthy" except for one test where my levels were elevated just slightly, but enough where they wanted me to have an Upper Endoscopy because they suspected I might have a problem with gluten. When the results came in from my Upper Endoscopy my doctor called me and said that I did indeed have Celiac Disease... this was the FIRST time a doctor gave me a legitimate name/reason for why I had been feeling the way I had for my entire life. I basically cheered on the phone and she was a little shocked because, in her words "normally happiness is not what I hear when I give patients this diagnosis... I'm actually not really sure how to react here." This doctor was giving me a diagnosis of an autoimmune disease that is very serious and I basically hugged her via the phone. Even when I went to the follow up appointment with my parents where my doctor was expecting tears while she told us all of the serious issues I could develop at any time (lord help me if I ever develop diabetes 1 and have to give myself insulin shots), but I wasn't sad at all, just curious and so happy she wasn't telling me "you're totally healthy and all of your tests came back perfect." She had an actual diagnosis AND a plan to get my body back on track to being healthy again!!!! It's still shocking to me that it takes an average of 6-10 years for someone to be diagnosed with Celiac Disease even though it took me 21 years to be diagnosed.. But to be fair there are over 300 symptoms of celiac disease and each person experiences those symptoms differently so doctors are trying their best.

Where/What Can I Eat?!

Now that I had the diagnosis and met with a nutritionist (and other doctors to make sure everything that can go wrong with an autoimmune disease wasn't going wrong with me) I had to start making serious changes to my diet! Now that I'm over 2 years out from my diagnosis, I pretty much have this whole no gluten thing down! Trying to eat out with a gluten sensitivity is basically impossible, seriously here are the steps you have to go through. Not only do you have to do background research on the restaurant but it actually seriously hard to find gluten free options at restaurants and it takes a pretty bold person to ask restaurant staff to make special accommodations for you if they don't have any gluten free options already available. This is not my strong suit because I also have a fear of being the center of attention even in small groups (unless I'm telling a story or purposely put myself in the center of attention). But hey, if you are comfortable with only ordering a salad with no croutons & know the ingredients of the salad dressing options (because watch out, there's even gluten in those!), are a bold person who isn't afraid of making the wait staff's job just a teensy bit harder or you just never go out to eat then you're totally fine! Geez Kasey, aren't you being a little dramatic?

NO, I am not being dramatic in the least! Remember how I was 21 when I was diagnosed, so I know exactly what I'm missing out on now that I can't even have a trace of gluten in my diet? I don't know how many of you reading this have a gluten sensitivity/allergy but if you do then I highly doubt you've had a deep fried cheese curd since you were diagnosed. I'm from Wisconsin, and I am a full on cheese head (even though I grew up right across the border in Minnesota) so I seriously almost started happy crying when Stephanie told me about the gluten free cheese curds via text yesterday.If you still think I'm being dramatic then imagine cutting out all products that contain wheat, barley or rye from your diet (and many other grains depending on your sensitivity because sometimes your body reacts to those negatively too) for the rest of your life. This means no bread, beer, pizza, pasta, Pringles, malt drinks, cheese curds, chicken nuggets, Chinese food, cereal (huge improvements in this area lately), chips, seasonings and more. (Seriously, when you get diagnosed you get a very large packet of information after meeting with a nutritionist who tells you everything you can't eat anymore and what will happen to your body if you don't cut those things out). Yes that list was mainly the things I miss most about gluten, but you get the idea. While gluten free alternatives to many of these products exist the few good ones are hard to find which is why it's so great that Together Farms is offering so many gluten free options!

Hooray, Burger Night to the Rescue! Tell me about the GF options!

Now do you understand why it's so amazing for Burger Night to have so many gluten free options!? Like I said above, I almost cried happy tears after Stephanie told me all of the gluten-free options that she is offering at Burger Night. The two gluten free beers are Copperhead (Copper Ale) and the Kickback (Kolsch) from the amazing gluten-free Alt Brewery in Madison, WI. The Copperhead Copper Ale is a Great American Beer Festival Silver Medal Winner! I didn't get too much time after turning 21 to know what kind of beer I like, but these are definitely beers I'm looking forward to trying. Plus we are the only ones to be serving Alt Brewery products on this side of Wisconsin, so it's kind of a big deal!At Burger Night we have a completely separate fryer for gluten free items in the works, and we are found the perfect gluten free bun from Green Bakery to top these amazing 100% grassfed and finished burgers (and other yummy things being announced soon). The fries are already gluten free and our Together Farms Chef will be making the breading for the cheese curds himself with gluten free ingredients! We use lard to fry everything in, which means we know exactly what is in our food and exactly what we fry that food in. If you're a member of the gluten free community, then you probably know how shocking it is for a small farm who happens to also serve burgers, fries and more on their land to have not only one gluten free option, but multiple!! Honestly when Stephanie said that along with the TF Chef she was planning the gluten free items I expected what restaurants usually offer up; a big piece of lettuce wrapped around the burger with some bland fries on the side. I've seen the start of the menu (stay tuned!), and with these gluten free options that Stephanie and the TF Chef created I can basically eat any one of the burgers I want!!!Are you as excited about these amazing gluten free options as I am?! Let us know in the comments if you've even heard of Celiac Disease/Gluten Intolerance etc before, or if you're in the GF community along with me! :) p.s. less than 2 weeks until Burger Night!!!

Stocking Stuffers You'll Want For Yourself