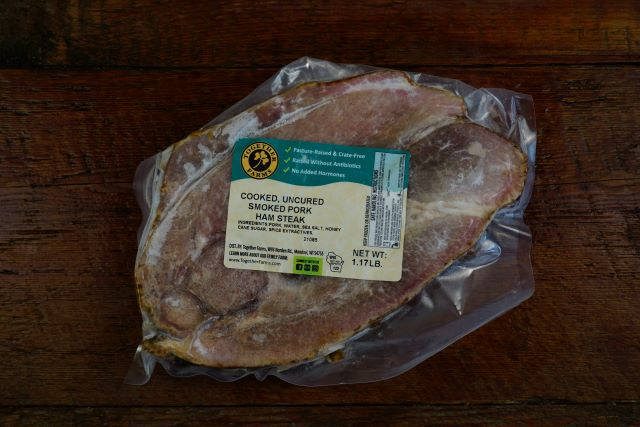 Together Farm's ham steaks are made using old-fashioned methods from pastured & organically raised pigs - this is a product hard to find but easy to love!

Our ham steaks are already cooked and are sooo versatile & fast for any meal of the day, just check out some of the ideas below:

Nothing ready for supper? Just grab one of these directly out of the freezer, throw it in the pan and heat to your liking! (I recommend a little lard in the pan to help fry it up since ham is naturally very lean.)

Add some scalloped potatoes and green beans as sides or whatever random things you've been wanting to use up and, voila!, you've got supper!

Dice it up and make a soul-warming batch of Loaded Baked Potato Soup or Ham, Corn & Potato Chowder.

Check out this amazing video starring Chef Joey Meicher teaching you how to easily make a restaurant-quality Croque Madame at home. So good!

Note that ham steaks vary significantly in weight, so please let us know in your order comments if you'd like bigger (over 1.5 lbs) or smaller (under 1 lb).