It’s chili season (and unfortunately already chilly season)! This chili recipe has a bit of surprise ingredient (if you didn’t read the title) - pumpkin! I have had chunks of squash or sweet potato in chili before and I really liked it but this is a little different because it uses a can of pumpkin puree and when I made it the first time I actually used a large can of pumpkin so I wasn’t really sure what it was going to be like. Please note that I am NOT a pumpkin spice kind of girl and I own zero pumpkin candles so I was admittedly nervous.

I was so unsure how this would go over that I just told my family we were having “Chili”, I left the pumpkin part off. They even specifically asked me if there was anything weird about it. “Pssssh. What?! No. I don’t even know why you’d ask that?! It’s just chili.”

Me: “I don’t even know what that means. I’m not dignifying that with an answer.”

Them: “You know, how you add all kinds of stuff like corn?”

Me: “Okay, so sometimes I’m trying to just get rid of some stuff, big deal, a little corn is good in chili. What even is “regular chili”?”

To myself: quick, bring up noodles before they can ask any more questions!

Me: “At least there are NO noodles. Especially not spaghetti noodles!”

Them: “OMG, why do people add spaghetti noodles?! That’s not even chili anymore it’s like a weird spaghetti.”

They then forget what we were even talking about and go back to making laundry and destroying the house.

I then proceeded to do a really good job of not saying the word “pumpkin” and hiding all the evidence.

Yep, right up until it was literally time to serve it and I accidentally said “Okay! Ready to try the Pumpkin Chili?!” to the only child that was downstairs at the time (because I was legit excited about trying this).

And then a miracle happened.

Miraculously, the younger child, who normally cannot hear me when she’s upstairs, heard the word pumpkin and came running downstairs…..

The Younger Child: “THERE’S PUMPKIN IN IT!? We knew you were doing something weird. No thank you.”

The Older Child: “Yeah, no thanks. I’ll find something else.”

and so then just Andy and I ate the [Pumpkin] Chili.

Their loss! I thought it was delicious. I added a little sour cream and cheese to take it over the top. I wasn’t sure if those additions would enhance or detract since there’s cinnamon and pumpkin but it definitely enhances.

And, Andy, my meat-and-potatoes-guy, finished his bowl and had one the next day so that means it’s not too weird. :)

I also did keep the pumpkin a total secret from him until after his first bowl and he never said anything tasted weird or anything. I mean, he was wondering why I kept looking at him expectantly while I waited for him to ask me questions about it or ask for something else but his mind went in a totally different direction not at all related to food, or this blog post really. I mean, they do say the way to a man’s heart is through his stomach but…..hey, isn’t it weird that people add noodles to their chili? I mean macaroni noodles maybe but spaghetti noodles?!?

Plus, the cinnamon helps to warm you up from the inside too! Ahhh, that’s what you’re feeling inside Andy!

The good news is that no sugar is (directly) added, all the sweetness that offsets the spiciness, comes from the pumpkin and peppers.

Note, too, that there aren’t any beans so this chili can check off the boxes of most diets. Of course, if you’re a bean lover, some small butter beans would be really good in this….and then you are also not feeling cinnamon or “love” deep down but probably something else entirely.

hahaha….I crack myself up sometimes.

When I posted my test batches on facebook it was suggested to try adding some orange zest to brighten this, or any, chili up a little so if any of you try that let me know how it turns out! And as always, share your pictures with our facebook group!

Any other tips can be posted there or left here including if this chili made your marriage a little stronger or the age of your can of pumpkin or what kind of banter you have with your family re: your cooking skills.

2 medium or about 2 cups onions, chopped

1 large can (28 oz) diced tomatoes, or 6 fresh tomatoes, chopped (if using canned, use the fire-roasted for more depth of flavor)

1.5 cups pumpkin puree (if you’re nervous use a small can, I used a big one and it was not overwhelming…it was also super expired but it still smelled good and tasted good! I bet I’m not the only one with a very expired can of pumpkin in my pantry so hopefully that helps someone.)

Gallon bags and a sharpie if you’re making one to freeze for later (or as a gift!)

To make now on the stove:

Fry the ground beef and onions in the bottom of a dutch oven or heavy bottom pot. You could add some garlic during the last minute or two of frying if you’re a garlic lover but I bet you were already going to do that without my prompting.

I do not drain off the “grease” (sounds like such a dirty word), this is tallow or fat from our 100% grassfed beef animals - this is where all the extra super good stuff gets concentrated, of all the things to throw out this is NOT it - you should throw out the meat before you throw out this liquid gold. Of course, if you’re using meat that you bought from a middle man that has not verified with their own eyes the farm (not factory) that raised the beef (which would include all the grocery stores, yes, even Aldi), then the fat is surely concentrating vile things that should immediately be strained off and thrown out….this includes meat labeled as grassfed because labels are lies. Remember that and you’ll be fine. Then, if the beef is from a beautiful, small family farm not doing 100% grassfed (sigh) then I would still not save the fat - your omega’s are all screwed up and you’ll end up with an unhappy body. That’s the hardest step - but since you’re here, it’s now your easiest step! [shameless plug: you just click that link above, order with a few clicks and then sit and wait for grassfed beef containing liquid gold to show up in a few days right on your doorstep!]

Add everything else. Bring to a simmer. Cover and simmer on Low for an hour or until you can’t wait any longer. The goal is to meld flavors and soften the other veggies.

To make now in a slow cooker (IP’ers you can probably figure it out):

Fry the ground beef just enough to get it broken into small pieces - you can add the onion if you prefer. See note in the “To make now on the stove:” instructions for the proper handling any “grease”. Then add everything to the slow cooker. Cover and cook on Low for 6-8 or High 3-4 hours or until the meat is cooked through and the peppers are soft.

Tip: plug your cord into a timer if your slow cooker does not automatically shut off.

To make one to freeze for later:

Label a gallon-sized freezer bag with the recipe name, best by date (3-6 months of assembling) and cooking instructions.

Fry the ground beef just enough to get it broken into small pieces - you can add the onion if you prefer. Let cool. See note in the “To make now on the stove:” instructions for the proper handling any “grease”.

Add the par-cooked ground beef to the bag along with all of the remaining ingredients. Note that the water can be added on the day you cook the meal - just be sure to write that on the bag.

To cook: Thaw* contents of bag overnight. Dump thawed* ingredients into the slow cooker and add 1 cup of water or broth. Cover and cook on Low for 6-8 or High 3-4 hours or until the meat is cooked through and the peppers are soft.

Pro Tip: If you make a meal that can also be a freezer meal, always make two at once: one for now and one that you freeze for later. You will save so much time on prep and dishwashing alone that it is ALWAYS worth the tiny bit of extra effort. Use all your new free time well: a drink and foot soak.

*If the government asks I told you you had to thaw everything in the fridge before cooking it. In my chaotic life I often forget to do this or don’t thaw it long enough so there are still frozen chunks. In fact, I am so inept that I have actually cooked freezer meals from totally rock solid frozen in my slow cooker and lived to tell about it - but maybe my system is used to living on the edge with old pumpkin, dangerous cooking techniques, etc, so I don’t recommend you do it. I’m just letting you know that I did it and I experienced no ill effects. The only thing I noticed is that I did need to stir the meal after it all thawed so it was evenly spread out in my slow cooker and I needed to cook it a little longer. Please refer to the cooking chart you should've received with your first order and use your Together Farms meat thermometer you should’ve gotten with a subsequent order to make sure your meat is to temp and you should live to cook another day!

Get to know farmer Andy! 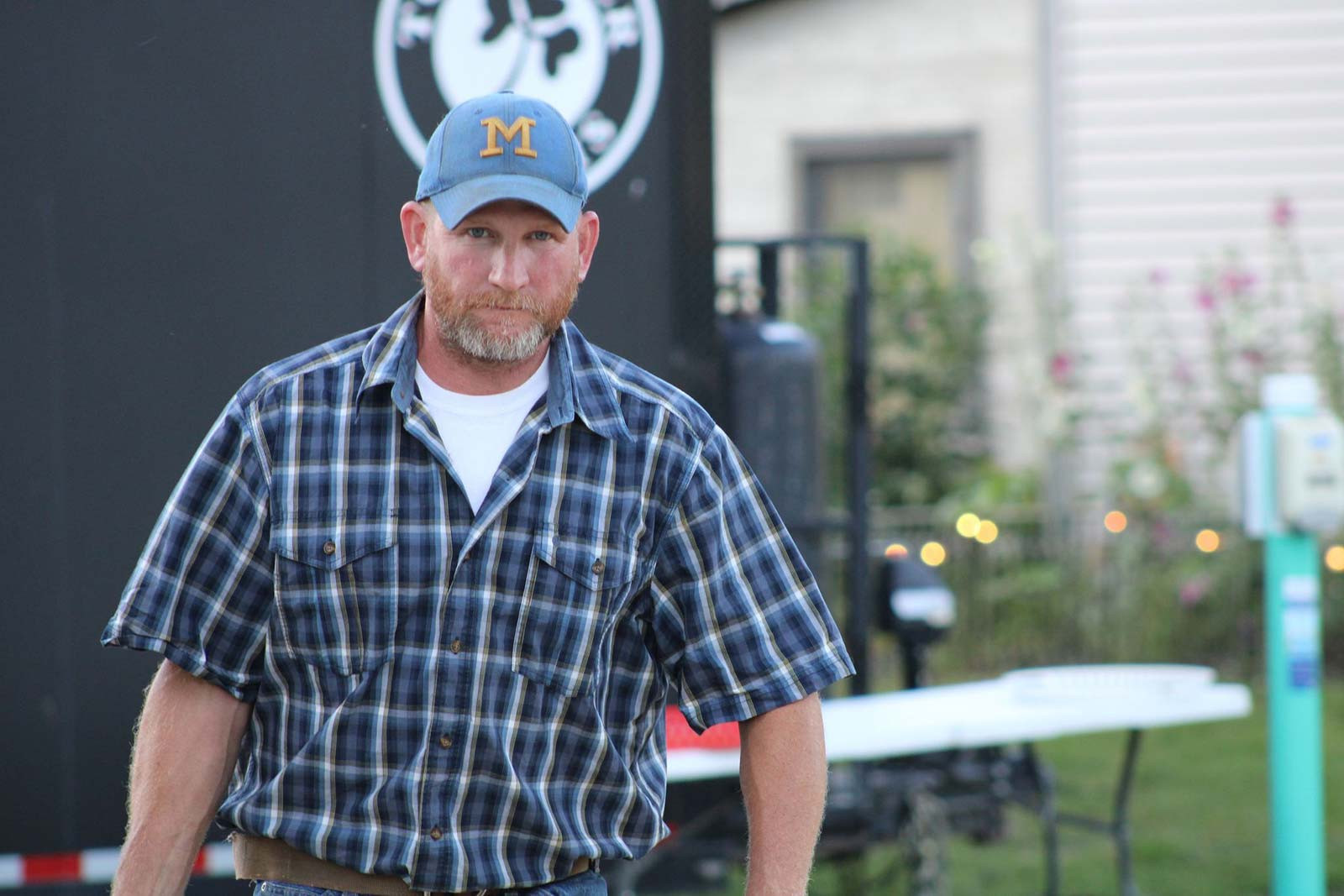 How to get pastured meat all winter long 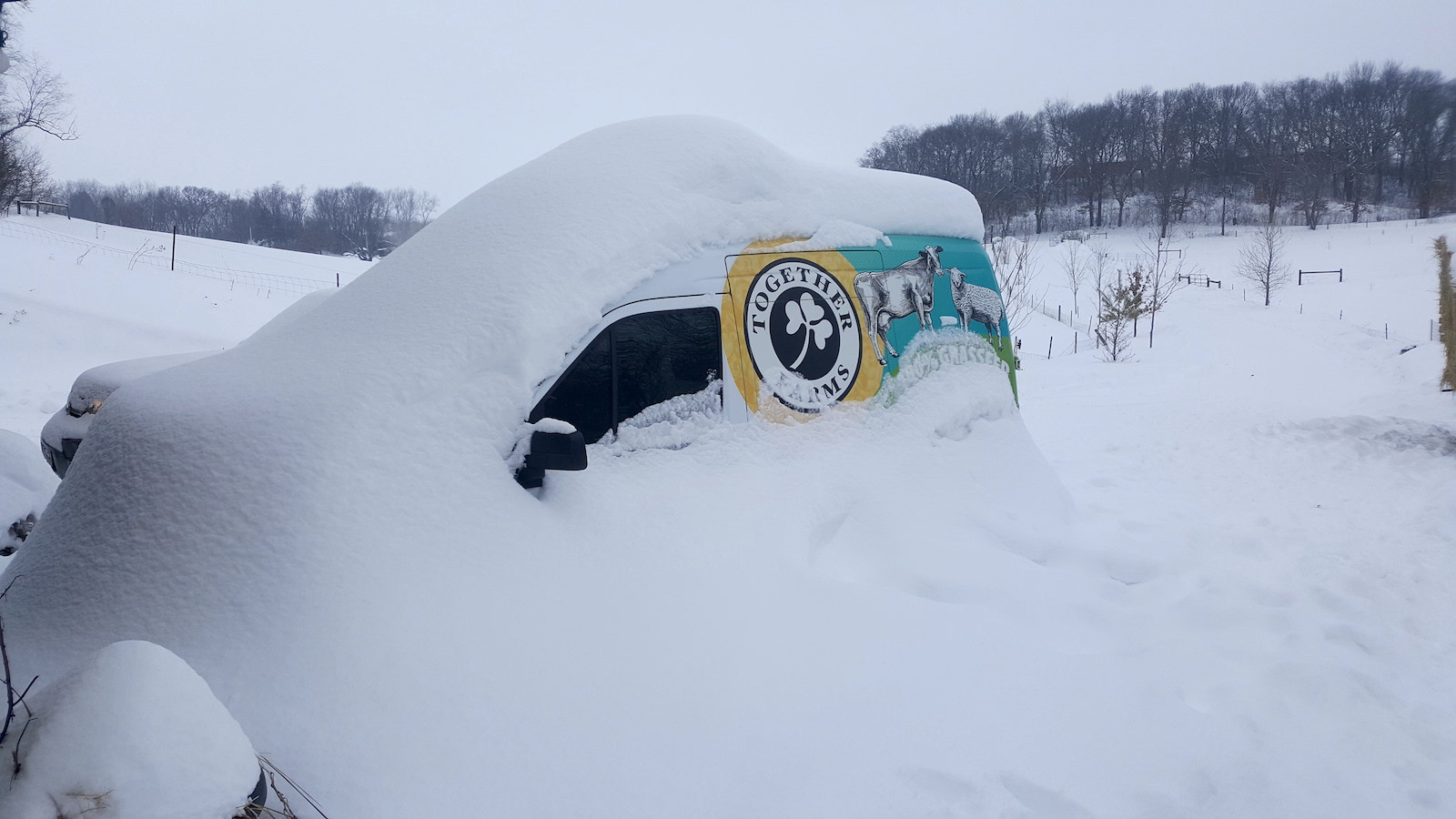